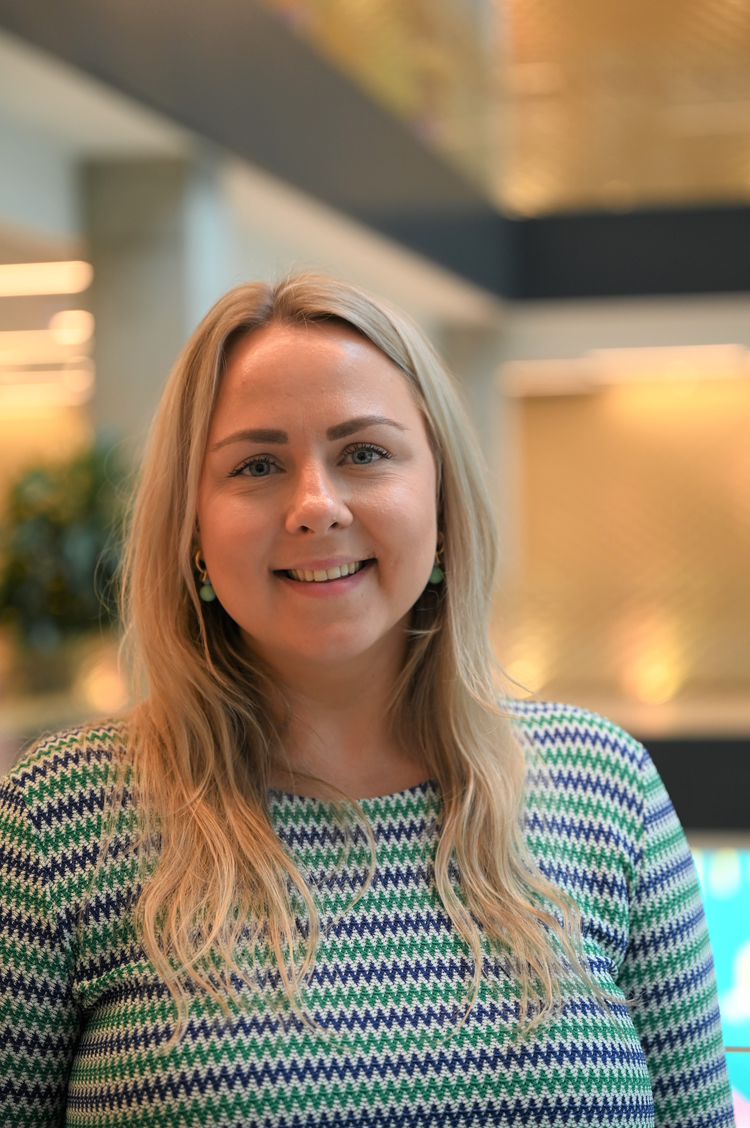 Her desire to test her abilities first led Emilija Skrebūnaitė, freshly graduated from school, abroad and later back to Lithuania. After trying her hand at three different job positions at Danske, this openly ambitious specialist landed her fourth job – as the head of a team – because of her desire to better understand the field of IT she was working in, for it was the only way she could feel a complete sense of responsibility. And she does not shy away from responsibility. On the contrary, she takes on more responsibilities voluntarily and encourages other colleagues to do so as well in order to reach their full potential. There are endless opportunities for this at Danske, and experience gained here is invaluable.

Not just solving problems but taking part in decision-making

Emilija saw this for herself during her more than six years at Danske Bank, where she began working after completing her studies in the United Kingdom and her first work experience at another technology and service centre. Emilija came to Danske after receiving an invitation from a talent recruitment consultancy tasked with finding employees for the growing company. Having tried her hand at the position of Junior Situation Manager, she already knew that she could and wanted to do more. This knowledge, coupled with her desire not just to solve problems, which is what she did in her first years at Danske Bank, but have a role in the decision-making process, brought Emilija to the position of Junior Project Manager.

“At the time, the company was working on a very large-scale project that had been going on three years, and I was working with the team that was implementing the changes. One of the project leads agreed to participate in the company’s Sneak Peek shadowing programme. I can thank Danske for that – I didn’t hesitate to take part in the programme and I chose the team lead I mentioned because I really liked his work. Even though I didn’t quite understand what was happening, it all seemed incredible to me, and I was very intrigued by what he was doing: endless meetings, decisions that needed to be made, being the person who decided how things happened and when,” Emilija Skrebūnaitė recalls.

Immediately afterwards, she told the team lead whose work she had been following closely for a week that she would like to do the same work he did. As the programme he was overseeing expanded, a new job position opened up, and Emilija wasted no time in submitting her application.  After going through all of the official selection stages, she got the job. The leader who had made such an impression on her now became her direct supervisor. “I worked as a junior project manager – I came in with no knowledge or experience in the field, but this was not an indicator of what I was capable of. My boss always told me that if I thought I was capable of more, he would give me more. If I want to take on more responsibility, he might even give me assignments that don’t necessarily match my qualification,” Emilija shares.

Every step along the way was made based on mutual agreement, with a clear direction and goals in mind. “As a junior project lead, you obviously don’t make any decisions on your own and you don’t participate in making them, and I was not happy with this situation. I decided to take on more responsibilities that would allow me to inch closer toward the decision-making – in consultation with my colleagues and supervisors. Whenever such opportunities came up, when I began to implement new projects, I realised that this was my area, even though, at first, I didn’t quite understand where I was going. I was good at managing initiatives and projects, I didn’t keep quiet, I spoke up about how I was doing more and that I was ready to take on a more important role,” says Emilija Skrebūnaitė.

Plenty of drive, courage and a can-do attitude

It was at this point that a colleague on the Danske Project Team received an offer she could not refuse. “Upper management rushed to find a replacement. But no one stepped up to take on the project she was in charge of, which was in full swing at the time. Meanwhile, I saw that this was a wonderful opportunity, and if I didn’t give it a go, I would have to wait for a change,” Emilija explains her decision to take advantage of the opportunity. Apart from the countless new responsibilities that came with launching Yammer at the company, she took on an additional burden – not to disappoint the colleagues, partners and sponsors who had been working on the project: “The lead I replaced was very much valued and beloved. It was difficult to imagine that someone could live up to her professionalism, but I’ve never lacked drive, courage or can-do attitude – this allowed me to take over the process smoothly and continue her work just as effectively.”

Emilija’s determination and hard work did not go unnoticed – that same year she was promoted to the position of project lead, which she worked at for a year. “During that year, I oversaw several projects in the End User Services Department, and I saw very clearly that this was an area and a type of work that appealed to me the most. Besides, I got to know the people working there as a community, and whenever I thought that I might not get to work with them anymore, I felt sad. So, when there was an opening for my current position, I didn’t even have to think twice,” Emilija says, recalling her journey to her current position as Head of Technology Adoption Services.

Along with her new position, half a year ago, Emilija also got her own team with which she has been working on the adoption of the Microsoft ecosystem at the company: “This is a difficult journey. The company is prepared to open up all of Microsoft’s tools for its employees, and we must ensure that all of the company’s 22,000+ employees use them. The needs of staff working in different departments are different, but we need to find a way to convince everyone of the benefit this new software brings – to show in terms they will find acceptable that the new tools are effective, increase productivity and help them maintain a work-life balance”. In her own right, Emilija is trying to find a balance between her direct duties and her desire to understand and know more: “Just like I did when I was a project lead, I am doing my best to understand the technology I’m working with, even if these are concepts that are hard to grasp. If I don’t completely understand what’s happening around me, I can’t take complete ownership of my work. I make an effort to participate in all the supplier sessions available to us and spend part of each day with the engineers trying to figure out how one or another tool works. I also encourage my colleagues to dive deeper and seek greater understanding,” says the Head of Technology Adoption Services.

Emilija Skrebūnaitė also encourages her teammates to not limit themselves to what is written in their job description. “I want people to do the work that truly motivates them, that positively energises them. If any member of my team wants to learn something that maybe doesn’t quite fit their job description, I encourage them to go and learn. There are countless opportunities for that here. The people who work here alone, many highly qualified specialists, who are always ready to help you out – that’s priceless, just like the experience you gain working and growing alongside them,” Emilija Skrebūnaitė explains.

According to her, Danske Bank invests so much in people, not just by opening up opportunities for learning but also by providing many other kinds of additional benefits. For Emilija, it is important that her own values align with those of her employer. Even though she is inclined to spend her free time away from work, she encourages her colleagues to take advantage of all the opportunities available and appreciates the benefits they bring: “The volunteering initiatives Danske offers in the areas of diversity and sustainability broaden your knowledge and awareness of how much is going on around you, where it’s worth directing your energy after work and what interesting or useful things you can do.”