From initial idea to creative solution: how colleagues created an interactive LED screen?

In many cases, innovative solutions are the result of collaboration. The Danske Bank Markets IT teams, along with specialists and students from Vilnius Gediminas Technical University (VGTU) ‘LinkMenų fabrikas’, have created a unique LED display and integrated game for you to try in the lobby of the DGITL office. The idea behind this screen and its software came to the Markets IT team once they set out to face new challenges, following the development of the successful Hexagon game. The result of the project is an LED screen with 6724 pixels, measuring almost 4m long diagonally, complete with software solutions that enable user interaction and engagement. Colleagues from the Markets IT team shared their experience with this exciting project. 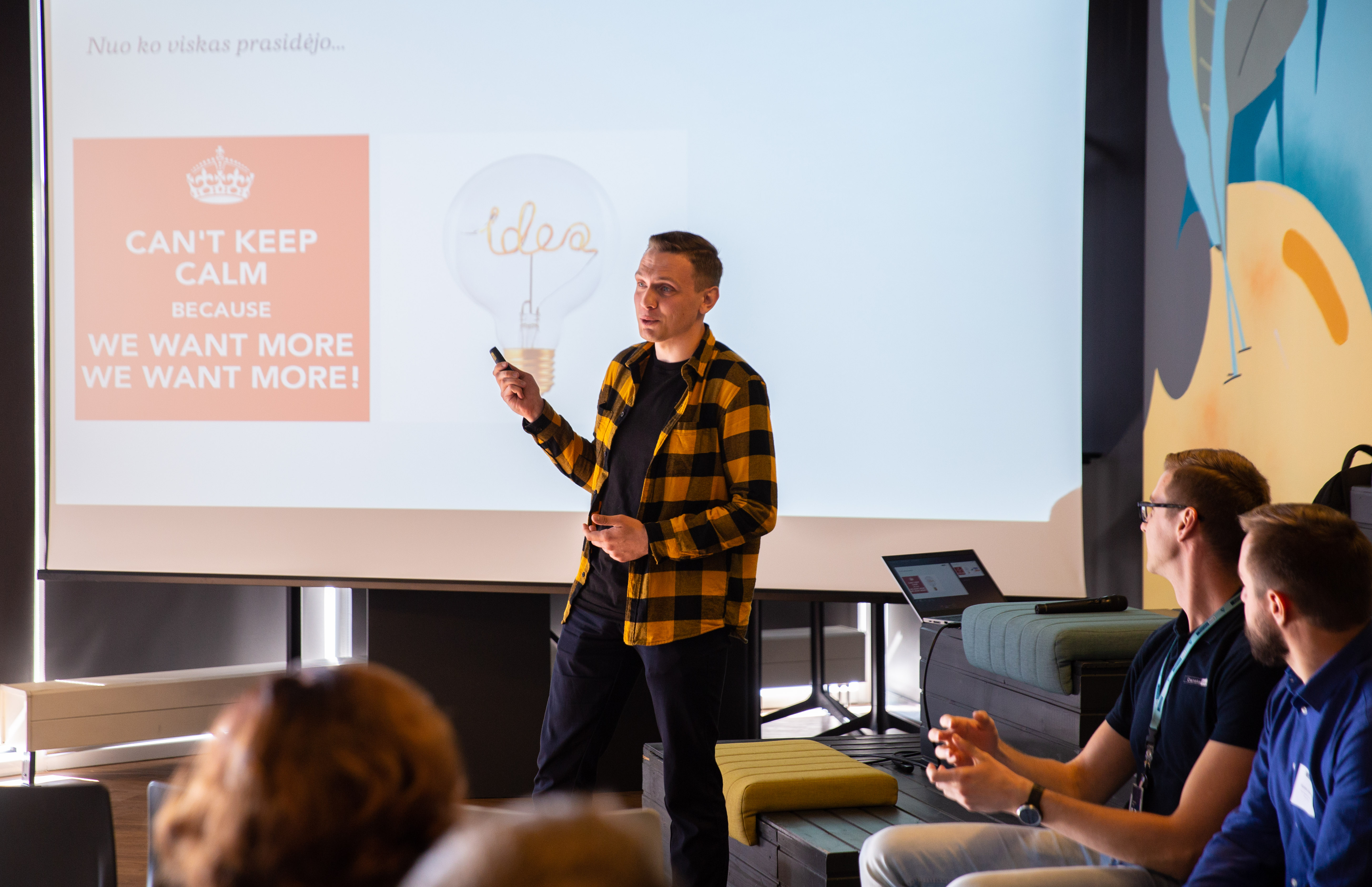 An example of successful collaboration

We are an active and dynamic team, so whenever possible, we take on exciting projects that aren’t necessarily directly related to work. These become a kind of creative exercise that allow us to gain experience, come up with unique ideas, and implement brand new solutions. After completing the Hexagon game, which was used in career days in both Lithuania and Denmark, we decided to take on new projects and seek out ideas. For our next undertaking we dreamed of a project that wouldn’t just include software, but hardware too. In order to help us with the hardware, we invited VGTU ’LinkMenu fabrikas’ to help us out.

We came up with a number of ideas in brainstorming sessions, from virtual tours of the office to augmented reality-based solutions. Certain concepts were really crazy and technically challenging to implement. For this reason, we included colleagues from ’LinkMenų fabrikas’ who helped us evaluate these ideas in terms of their practical implementation. Through these discussions, we refined the concept of an interactive LED display.

Later, of course, several technical questions had to be agreed upon: how big would the screen be and what would its resolution be? From what materials would it be constructed? VGTU technicians and students initially produced several different prototypes of a 4x4 pixel display. We ended up choosing a white acrylic version, made of thinner acrylic glass. We wanted to present an aesthetically pleasing exterior, along with big pixels that resemble retro video games. For the final product, a single pixel on this screen measures 3x3 cm. When designing the display, colleagues at ’LinkMenų fabrikas’ used rapid prototyping technologies such as 3D printers, laser cutters, and CNC milling machines.

Our team’s task was to program a short, intuitive and interactive game. We wanted people to have a quick and fun virtual experience; the essence of the game had to be easy to understand from the context. We created a simple game which is now open to all UNIQ office staff and guests.

The game employs facial recognition technology. As you approach the screen, the camera captures a human face and displays it on the screen, and displays the message "Scratch me" as the game begins. There are no further instructions on what to do, but it’s hard to misunderstand the idea – a square follows the motion of your head, “cleaning” the screen as you move. When we were developing the game, we were primarily looking for an exciting idea, not a highly innovative technical solution. I think the result was entertaining and engaging.

Still, this game is just one example of how to use the screen. We want the screen to become an opportunity and inspiration for others to bring their ideas to life. We have all the technical specifications available for reference. As a result, the project is open-ended, and further uses of the screen depend solely on the imagination of colleagues or other people interested in the project. I believe that even the most sophisticated artificial intelligence solutions can be used and applied to this screen. It's just a matter of desire and effort. We invite everyone to come forward and implement their ideas. 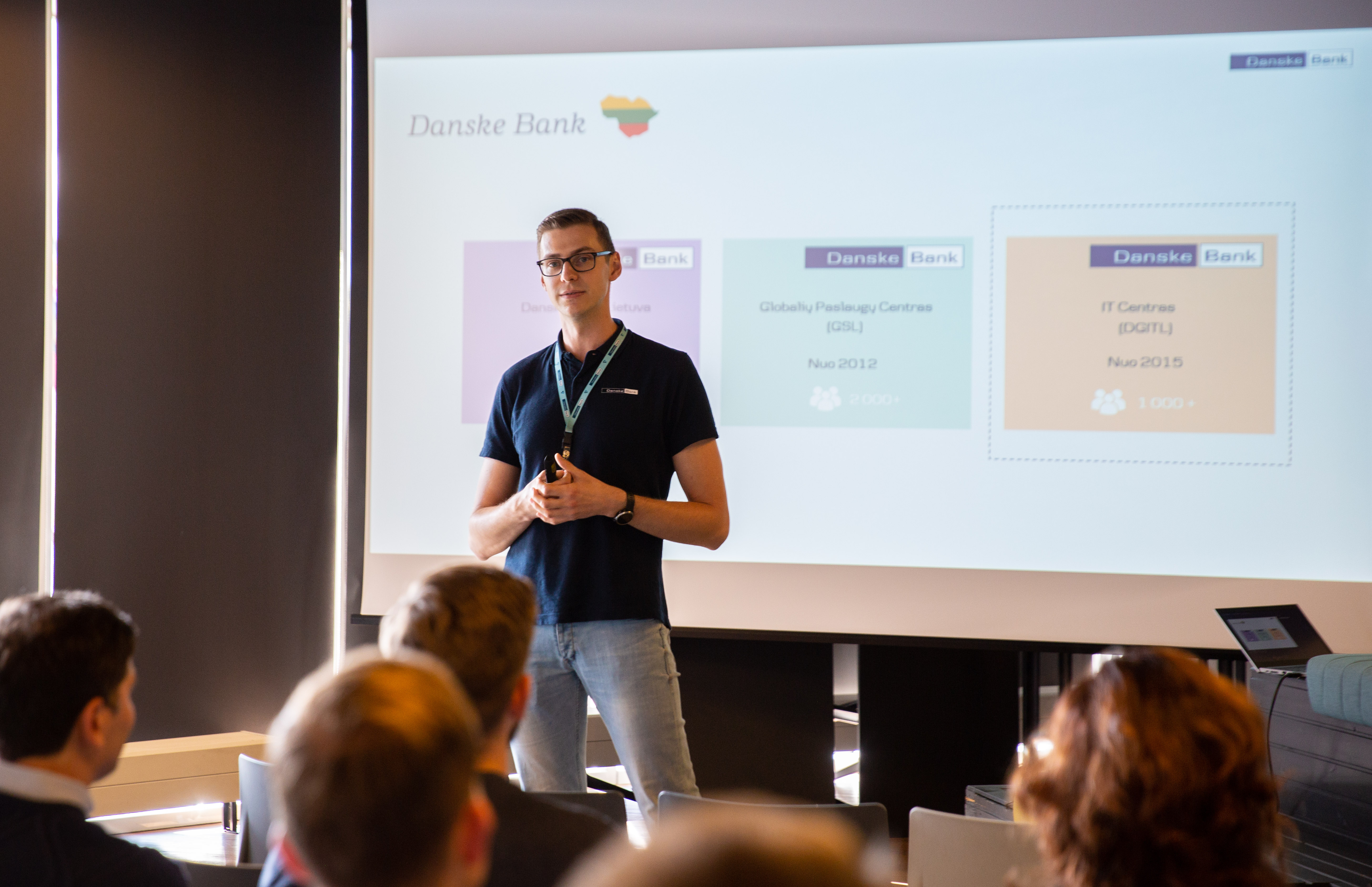 Although the display project was only a kind of extracurricular activity, the team was very enthusiastic about it. We also learned some valuable lessons from it, which I believe will be useful in other projects which are directly related to the Bank’s work.

Of course, we had a few surprises over the course of the project, but these are probably inevitable when it comes to innovation. It also required some last-minute fixes – the LEDs didn't work right away, and some parts of the screen came off just before its unveiling, so the entire design had to be transported back to ‘LinkMenų fabrikas’. But, in the end, we managed to present our unique solution in time.

It took about a year to implement the project, from the distillation of the idea to the end solution. Of course, the team didn’t have much time to work on this – around 2 hours per week, though we sometimes didn't have the time to spare. If we were working on this at full capacity, these innovations could have been created faster. For example, it took about two months to develop the game, but with more resources, I think we could have created it in a week.

The process of signing the necessary contracts and solving legal issues took quite a while – around two months. We will certainly keep this in mind when implementing new projects in the future! One of the most essential design lessons we learned from this project was to spend more time testing the solution, and solving the various unexpected issues which emerged in order to avoid last-minute corrections.

We are pleased with the decision to cooperate with VGTU ‘LinkMenų fabrikas’. We hope that this solution will brighten our colleagues’ days, and perhaps inspire them to come up with new ideas.