Working in Lithuania is like a gift to Natalia: my experience is perfectly applicable here as well 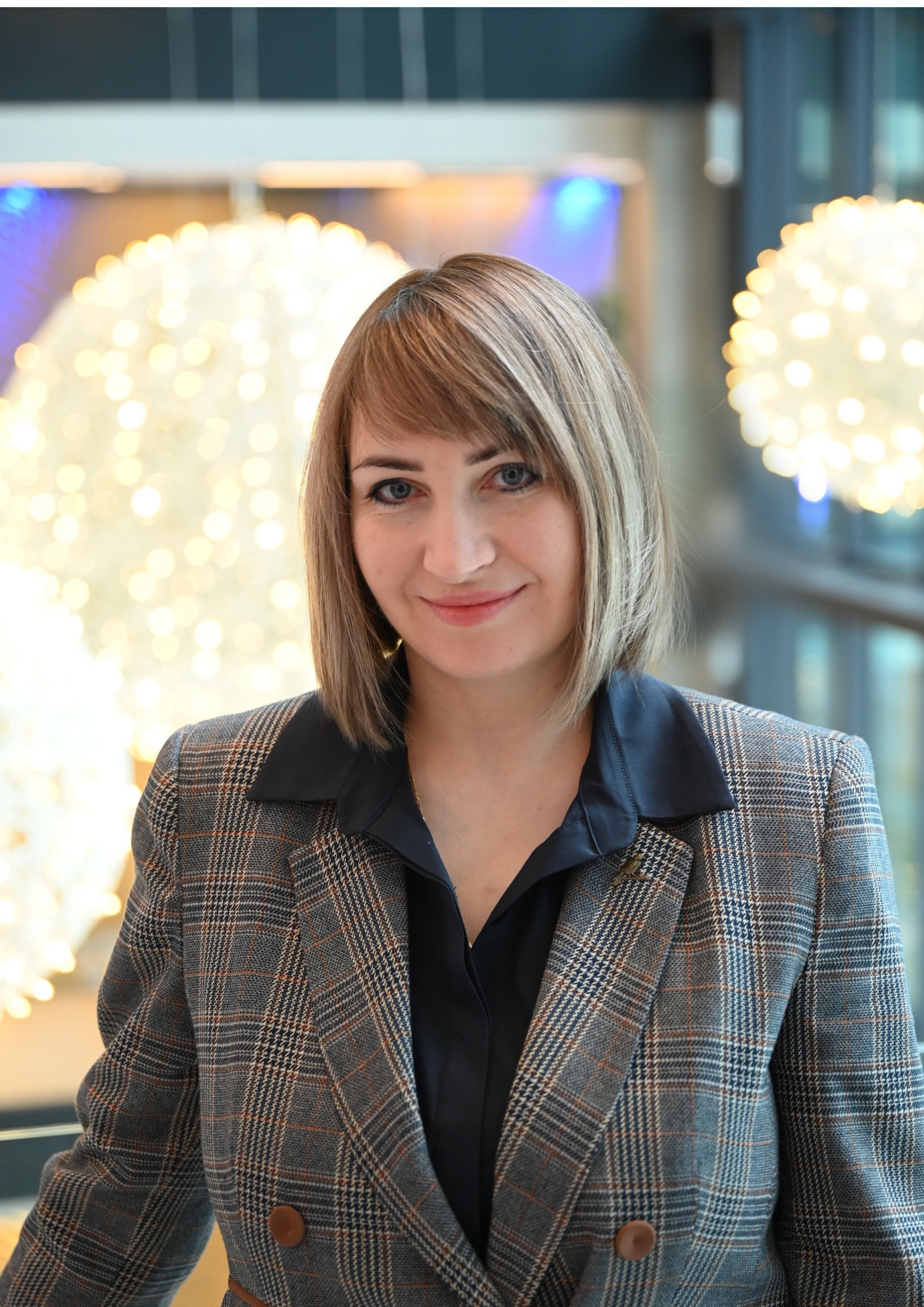 Nataliia refers to the professional experience she receives while working in Lithuania as a gift. She has been working in Vilnius for seven months and is taking care of her two sons. When she talks about the support she receives from her colleagues, it brings tears to her eyes as she doesn't have any acquaintances here in Lithuania. She only made the decision to move to Lithuania after she left the Ukraine because Lithuanian volunteers brought her here and provided accommodation for her. However, one of Nataliia's wishes is to be able to continue working for the organisation that hired her here in Lithuania, even when the war ends.

"When I crossed the Ukrainian-Polish border, there was no one waiting for me in Poland, I had no acquaintances there. I did not even think about Lithuania. Spending the time in a refugee centre, I wondered what to do next. When my brother called me, he suggested that if I wanted, he would ask his friends in Lithuania if they could help. He was immediately told that it could be difficult to get a job there when all business ties with Russia were severed, but they gladly agreed to help with accommodation – not only did they take me in, but they also came to Poland and brought me and my two children to Vilnius," Nataliia, who arrived in Lithuania less than a month after the outbreak of war in Ukraine, said.Although the Ukrainian media reported and warned that a war might break out, neither Nataliia nor her husband took this information seriously. "However, my dad convinced me to pack a suitcase in case of an emergency. Instead of a suitcase, I packed a small backpack with documents and a few things, and my husband and I joked that my dad made me do it and that the information about a possible war was exaggerated. We also joked with the parents of our child’s kindergarten groupmates – at the time, the group was temporarily closed due to a COVID-19 case, and we exchanged smile emojis, asking when the quarantine would be over so that our children would be able to go to the kindergarten for a little while before the war," Nataliia remembered.

When hostilities began on February 24th, Nataliia and her husband were still attempting to stay in Kyiv. "We believed that no one would dare attack Kyiv, but the next day we traveled to my husband's parents' home in the Zhytomyr region after spending the previous night awake due to the continual explosions going off all around us. We spent a few days there – his parents, who are elderly, were also frightened. We would have had to stay in the basement with the children, but they would get sick right away, so I decided to leave. Leave to nowhere, as I did not know what to expect in Poland," she said. Her husband drove her and their children to the border. "After joining a long queue at noon, we waited in the freezing cold with young children who were constantly asking to eat or go to the bathroom, and we finally crossed the border at 6 p.m.," the Ukrainian woman recalls.

Proud of her job in Lithuania

Nataliia began to look for a job as soon as she got to Lithuania. "I felt uncomfortable living with people I did not even know. Additionally, kids act like kids and always want me to buy them something.

So I started to look for a job. I saw an ad for a job at Danske Bank, but I thought I could not work in a bank in Lithuania because I do not speak Lithuanian. Luckily, my neighbor pointed out that it only required an intermediate level of English. After I sent my CV, they called and scheduled an interview. I was most concerned about my English language skills – it was the first job interview in English in my life. Later, my current team leader said that he saw that my language skills were not very strong, but he appreciated the fact that I tried to speak, even if I made mistakes, I did my best.

She started taking English classes as soon as she got the job. “In Ukraine, I worked for a large international bank, but they only sent you to language courses when you earned it, and you had to study outside your working hours. It was really difficult, especially when you have a family, children. Here, they encouraged that I attend English classes right away,” Nataliia, who has 18 years of professional experience, said. “I have worked in banking since I was 18. My first jobs were in various Ukrainian banks, and my most recent and longest employment was in an Italian bank where I worked with foreign exchange operations. Because the systems are different and all the work is done in English here in Lithuania, I have to learn everything from scratch, but it is working well, and I have already learnt a lot and gotten used to it," she added.

In addition, Nataliia is happy that her job at a technology and service centre in Lithuania is very interesting. "In Ukraine, working with cars and their leasing is considered prestigious, while in Lithuania, I handle leasing contracts of both natural and legal persons for bank clients in Sweden and Denmark. I draw up contract renewals, we send them out for signature, and we check expiration dates. I feel happy and brag that I am in the business of leasing high-end vehicles. My friends in Ukraine are amazed, particularly the guys," Nataliia added.

Nataliia’s husband is also proud of his wife. "I have two children born one after another and was on parental leave for several years. When a husband sees his wife at home all the time, sometimes he starts to assume that is all she can do. Now I am on my own in a foreign country, taking care of both my children and myself. My husband told me a few times on the phone that he is proud of me for handling it all by myself and for having such an interesting job," she shared. She and her children have already moved out of the apartment of the family that took them in and are renting an apartment themselves. Nataliia’s older son, aged 8, is in the third grade, and her younger son, aged 3, is in kindergarten.

Flexible work is the biggest advantage. Work hours in banks in Ukraine are strictly 9 a.m. to 6 p.m. Kindergartens are also open until 6 p.m., but I had someone to help me there. Here, I can work from home, so I get off work early, pick up my son from kindergarten and, if necessary, finish the work. This is a very big plus for working mothers. I can also take care of my child at home when he is ill. Employer-paid health insurance also provides security at such time.

She recalls her first days at Danske Bank with a smile: "I brought my own cup and tea, because that is what I was used to, but then I found out that everything was provided here. If I had the time and possibility, I would definitely go to the gym at work. There was no such thing in Ukraine."

Nataliia acknowledges that the work is more composite in Lithuania as she is responsible for multiple markets. “I am busier here and have clear work plan every day and I know what I have to do. But unlike in Ukraine, where I also worked in a foreign bank, the employees here are very well looked after. Our team leader Eugenija says that if we do not get something done or right, it is not our problem, it is hers, because she has to organise everything properly. Whereas in Ukraine, if something went wrong, my manager would say that it was my problem and I should do whatever I want to fix it,” Nataliia shared.

Colleagues do not let her feel alone

The care of her co-workers moves Nataliia to tears. "I was very warmly welcomed at work – they surrounded me with care and have been supportive from the very beginning. One of my colleagues has become my closest friend here in Lithuania. When my child was sick, she asked if we needed any medicine and brought fruit. I even feel uncomfortable receiving such attention, but when your co-workers try to help you as much as they can, you do not feel alone, because the hardest thing is when you realise that you are all alone in a foreign country and there is no one to rely on." By the way, her father spent a week visiting Nataliia and her kids in Lithuania. She had intended to visit her family in Ukraine, but changed her mind following the active attacks as from October 10 and did not go, so he came to see his grandchildren.

When talking about the future, Nataliia’s first wish is to see an end to the war in Ukraine. "War is undoubtedly a terrible thing, but the fact that I now have the chance to gain such invaluable experience strikes me as a sort of compensation. It is a gift, fate has given me this opportunity," she said proudly. When asked to list her likes, dislikes, comments, and suggestions for a survey at work, Nataliia wrote down her request to be able to continue working for Danske Bank remotely after the end of the war, just from Ukraine. "Of course, my heart wishes to go back home to Ukraine, but I also I would like to do keep such a good job."